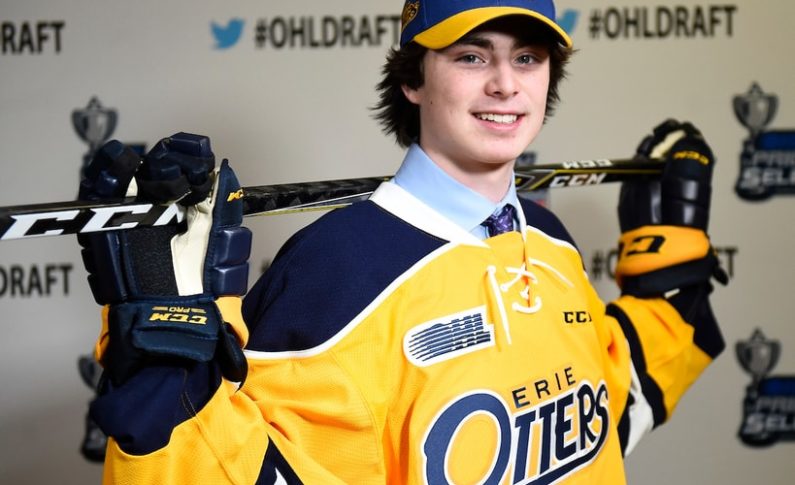 The 16-year-old defenseman out of Toronto has made an impact right out of the gate for the Erie Otters and has drawn comparisons to some of the best defensemen to ever come through the OHL, but he believes that he still has much to learn.

“There have been some rough patches on the ice in the sense that I’ve had to adapt to the game in my first year in this league,” Drysdale admitted to BTS Hockey. “It’s been a big jump up for me, but I’ve enjoyed it so far.”

Drysdale points to the pace of the game in the OHL being the hardest thing for him to adjust to.

“The speed at which you have to make decisions has been an adjustment for me,” Drysdale said. “The speed at which players are coming at you and chipping in pucks. I have to make decisions one or two seconds quicker than I had to last year, so that was the first thing that I really noticed, and was the most difficult thing. I’m learning the ropes though and I feel like I’ve adapted pretty well.”

Not only does transitioning to the OHL mean a step up in competition on the ice, it means a step up in responsibility.

“It teaches you professionalism because you always get reminded by your coaches that people are watching what you do,” Drysdale said. “You have to keep that in the back of your mind and make good decisions. That’s probably what makes hockey different from sports where players would be in high school at this age.”

Between going to events around Erie, meeting fans and all that comes with being a top player in Erie, Drydale understands that it all comes with a certain amount of responsibility.

“The big thing is just showing people respect,” Drysdale said. “The fans play a huge role in how we play, so just showing them respect whenever we are out and about at events like that. Having kids coming out to get your autograph and to take pictures with you is a huge honor. It means you’re doing something right. It’s a big responsibility for us that they come out to see us, so we just have to give our time.”

Despite being one of the youngest in the league, Drysdale says he always is trying to make an effort to help lead the team, but he also is learning quite a bit along the way.

“I’ll always try to be a leader whether there’s a letter on my jersey or not,” Drysdale said. “I just want everyone to know that they can ask me or talk to me about anything. One of the big things that my coach taught me growing up was that you don’t have to have a letter to be a leader. I try to lead as much as I can, but as a 16 year old you have to take the time to learn from the older guys on your team.”

Seen as one of the best skaters, if not the best skater in the 2020 Draft Class, Drysdale points to practice and a certain style of training as a factor in his agility.

“I was a bit unique,” Drysdale said. “I always had backyard skating rinks when I was a kid and my dad would run me through drills. But growing up I’d always take figure skating classes, working to improve my edges. Now that I’m older I’m working with skating coaches and working on other defenseman specific drills to try and help me in any way possible.”

How has this translated to his play on the ice?

“Being able to be more elusive, and being able to get away from guys using my edges helps for sure,” Drysdale said. “That’s done nothing but benefit me in game situations, and it’s been able to help me separate myself.”

“I want to show that I can play with bigger guys as a smaller defenseman, and make a difference in games,” Drysdale said. “I just want to be a game changer and help my team out as much as possible. With working hard in the summer and working out, I’m going to do all the training I can do this year and into next year.”

Listed at 5-foot-11, 165 pounds, Drysdale is in the next wave of puck moving defensemen, and he says he’s watched the best of the best at that position in the top league in the world.

“Growing up, I’d watch guys like Drew Doughty or Erik Karlsson,” Drysdale said. “I liked to watch them the most because of their two-way game and their offensive ability. I like to jump up in the play and be the third or fourth man up in the rush so I like to watch those D-Men who use their creativity to get up into the play. I watched (Travis) Dermott too who played at Erie and is in Toronto, so I’ve watched a lot of him. Morgan Rielly too, he’s having a breakout year this year, and I try to catch as much of him and learn as much as possible.”

Representing his home country is something that Drysdale takes pride in, and hopes to continue to have the opportunity to do as his career progresses.

“I’ve been lucky enough to represent Canada at the U-17’s and that was a blast,” Drysdale said. “If I get another chance to do it at the Hlinka- Gretzky Cup or at the World Juniors it would be an honor. It’s one of my biggest goals and I hope that I can achieve that in the next couple years.”

With many talking about the loaded 2020 draft class, Drysdale says that there’s some healthy competition with his fellow countrymen.

“The guys that I know like Quinton (Byfield), (Cole) Perfetti, (Jacob) Perreault, are all great guys,” Drysdale said. “At the same time, we are all competing and trying to push each other, because at the end of the day we are all working for those next spots. It’s good competition.”

Hockey is a tool to teach many valuable life lessons, and Drysdale says he’s learned much from the game.

“Respect and responsibility, how to act and how to treat others. It’s taught me everything, really. It’s taught me work ethic and being a team player on the ice, but also how to treat people off the ice. It’s a great sport, and it teaches anyone who comes through it great life lessons.”

Just 19 seconds into OT, he turns on the jets and fires a shot past Raaymakers.

The Otters rookie now has 5 goals and 24 assists on the season. @ErieOtters #OHL #2020NHLDraft pic.twitter.com/mJakgj1M2M