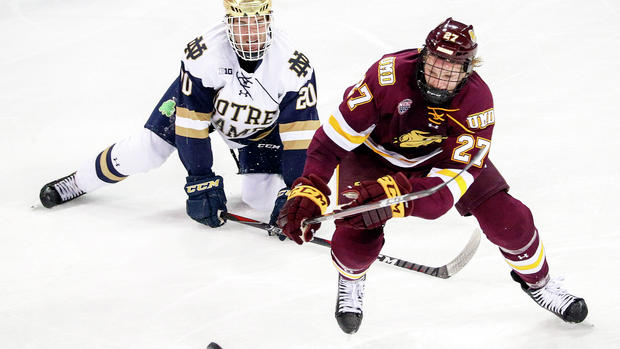 Riley Tufte admits to feeling some pressure when he first stepped on the ice at UMD. Tufte, a 6-foot-6, 230 pound winger with blonde locks, looked like he was there to save the day for the Bulldogs. Yet, he says college hockey was a tough adjustment.

“Coming out of high school, everyone expected me to come to UMD and be the Superman of the team,” Tufte explained. “I was just thinking to myself, ‘I’m not going to be what everyone thinks I am right away’. I struggled early on in the season, but in the second half of the season I turned it on, and that’s what I needed to do. It was cool coming in and being a first round draft pick, but I was no different than anyone else on the team.”

Things have gone pretty smoothly ever since. He’s been to two national championships and currently has led the Bulldogs to the No. 1 ranking in the country, most recently sweeping Notre Dame and Colorado College back to back.

“Everyone has wanted a lot out of our team, but I think that’s good. Coming off that sweep at Notre Dame, I think that was huge for our team and huge for our confidence. I think everyone expects that out of us and we are expecting the same. We expect to be number one here for a while. We have big things to come with this team.”

Tufte grew up in Blaine, Minnesota, and he says that where he comes from helped to shape him.

“I played four years in high school, and I think that not leaving early is something that’s pretty cool,” Tufte said. “I grew up in Blaine my whole life and not many people can say that they played for their team in grades K-12. That’s something that I’m really proud to say.”

Tufte had the chance to head to Fargo to play for the Force, but in the end he decided to head back home, which at the time in some NHL circles, was rumored to be a controversial decision. Despite all of that, it was a choice he was completely comfortable with.

When he was asked whether he had heard the speculation that going back to high school could have affected his draft stock, Tufte said said none of that entered his mind.

“I didn’t think anything of that,” Tufte said. “At the same time though, I was going to make my own decision. If they want to put me on their no-draft list, that’s fine, that’s their loss. I never really thought it was right that they put me on their no-draft list because I went to high school for three months, because most of my development is going to come from college anyways.”

Eventually he was drafted in the first round by the Dallas Stars in 2016. Tufte says there is a plan for taking the next step to the pros, but he wants to stay focused on the present.

“Yeah for sure, they talk to me every week or two,” Tufte said. “There is a plan, but we will see how the season goes. I don’t want to speak too soon on anything, but we do have a plan.”

Meanwhile, Tufte continues to develop his game and resume. He was selected for the Team USA World Junior squad last year in Buffalo, which he says was incredible.

“It was quite the experience, especially playing in the outdoor game. Playing at the Buffalo Bills stadium, seeing 40,000 fans for the game between Canada and the US, it was a battle. It was something crazy, something that I’d never seen before. I’d played pond hockey back in the day, but for a big game like that, it was awesome. Playing against all of those good players is something I’ll never forget.”

While achieving all that he has in his young years on the ice, Tufte did so while managing diabetes day in and day out.

“When I was eleven years old the doctor told me I had diabetes. I didn’t know what was going to happen and that unknown was hard for sure, but I’ve come a long way since then.  There’s a lot of hard work that goes into it. Managing it is something that I really work on. I think that I’ve done a really good job of that. Your lifestyle changes forever, but as long as you stay on top of it, you’re going to be healthy and you can live a long time with it. It’s tough at times, but I’m not mad that I have diabetes or anything like that.”

Being able to share his story however, and being an inspiration to the next generation is something that Tufte takes pride in.

“There’s been a ton of kids that I talk to about diabetes,” Tufte said. “Something that’s been special to me is hearing those kids saying that they look up to me. It feels good knowing that I’m making a huge impact on a kid’s life living with diabetes.”

While many kids look up to Tufte, Tufte has a role model of his own in Florida Panthers center Nick Bjugstad, also an alum of Blaine High. When Tufte made the decision to head to Duluth instead of Minneapolis, Bjugstad was the first to let him hear about it.

“He always gave me crap for not going to Minnesota,” Tufte said. “He said recently though ‘I can’t say much now because you played in two national championships and you have a ring and I don’t have any of that’. Whenever he says something like that, I can just rub that in a bit. But when I committed to Duluth, he was happy for me, he knew Duluth was a great program, obviously he would have liked to see me go to Minnesota, but that’s something special about him. He wasn’t too salty about me going to UMD, he watches quite a few of our games, and follows us, so I think that’s really cool that he does that.”

Whenever Tufte has the time, he says he tries to reciprocate.

“I have the NHL Package, so whenever he’s playing I try to flip that on, that’s my first priority, watching that when I get home.”

Tufte might be turning on the TV to watch his role model now, but it won’t be long before the next generation will be doing the same for him.